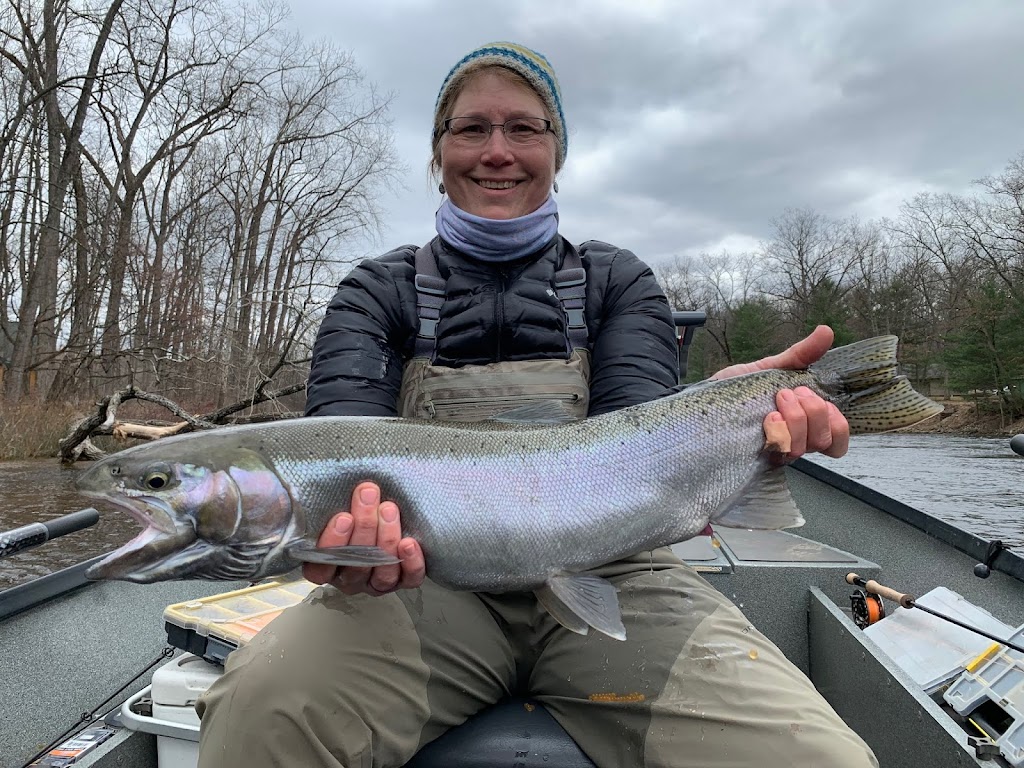 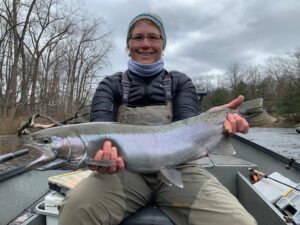 The day was cold, and the wind was a fierce howl moving down the river, chilling my boat mate and me. It was becoming frustrating as I swung my fly and it landed only inches from the boat, blowing closer to me each time. I watched my friend pull her line in and begin to change the rig on her line. Curiously, I asked her what she was doing – this was my introduction to “Chuck and Duck.”
In this article, I am going to go through the basics of Chuck and Duck, line set up and share when this method works best.

So what is Chuck and Duck you may be asking? It was first introduced in the early 1970s by a Fly Fisherman – Ray Smidt – a well know guide in the state of Michigan. It can be called bottom bouncing, dead drift, or the name that I learned Chuck and Duck.

This method is very effective for catching steelhead – especially on the cold, windy day, as I had experienced. This type of day will be when the steelhead are often lying in the deeper holes or along the edges of drop-offs. The rig used for this method is set up different than traditional fly fishing. It involves a heavyweight that will allow the line to sink rapidly to the bottom – the video by Brain from The Northern Angler Fly Shop shows how to set your line up – so I will not explain this now.
To cast this line, start by striping as much line as you think you will need. It is easiest if you coil the extra line loosely into your hand. This will lessen the tangling of the line. Then with the rig dangling at the tip of your rod, “Chuck it ” toward the target. It is lobbed as if you were attempting to land the weight into a basket. After the cast, it is then fished as usual. You will feel the weight bouncing off the bottom of the river. Be alert if you feel any tug, a stop, or anything different set the hook – remember hook sets are free. I have landed several trophy fish with this method – so give it a try and let me know if it is an effective way for you too. 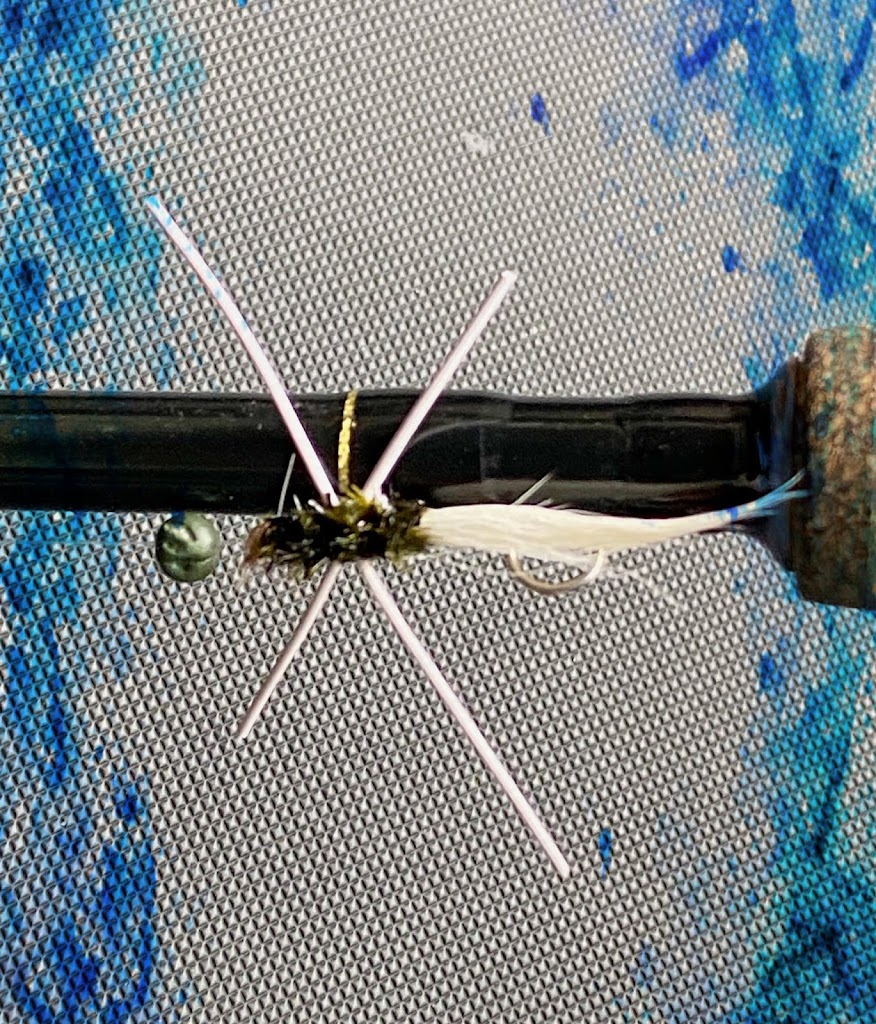 Waist deep in water that was pulling and tiring my legs, I began to wonder if fishing today was a… 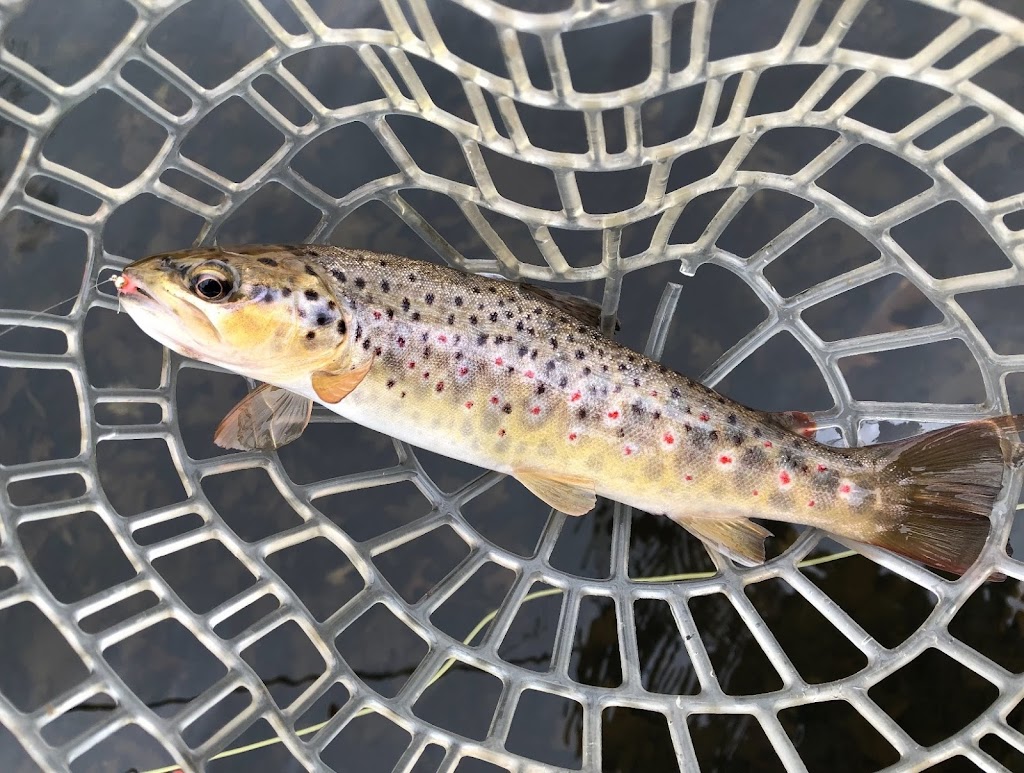 The spring can be a challenging time for Trout fishing in Michigan. Temperatures are variable, and the spring rains add…

The day was cold, and the wind was a fierce howl moving down the river, chilling my boat mate and…